Far from clarifying the government’s approach on the currency, following central bank Governor Godwin Emefiele’s pledge last week to adopt a more flexible exchange-rate policy, Buhari’s words have left the market as confused as ever. While some, including Standard Chartered Plc, said a looming recession had forced Buhari to change tack and allow the naira to depreciate. Others said the president — who once likened letting the currency weaken to “murder” — had signaled continued resistance to reduce its value.

“What Buhari was saying is that while he is committed to stability, he concedes that only a strong economy can have a strong exchange rate,” Razia Khan, the London-based Africa economist at Standard Chartered, said by phone on Monday. “No one wants to see disruptive weakness for the sake of it — hence the commitment to stability — but that commitment does not rule out the adoption of a more flexible foreign-exchange regime.”

Emefiele said on May 25, a more flexible exchange-rate system would be unveiled “in the coming days,” sending naira forward contracts to record highs as traders anticipated a devaluation. Nigeria has held the naira at 197-199 per dollar since March 2015, even as other oil exporters from Russia to Colombia and Malaysia let their currencies drop amid the slump in crude prices since mid-2014. Foreign reserves dwindled as the central bank of Africa’s largest oil producer defended the peg, while foreign investors, fearing a devaluation, sold Nigerian stocks and bonds.

Buhari, who has opposed weakening the currency since coming to power, didn’t specifically refer to the central bank’s statement in a speech Sunday marking his first year in office. He said only that he would “keep a close look at how recent measures affect the naira and the economy,” while also saying devaluation in the past “had done dreadful harm.” 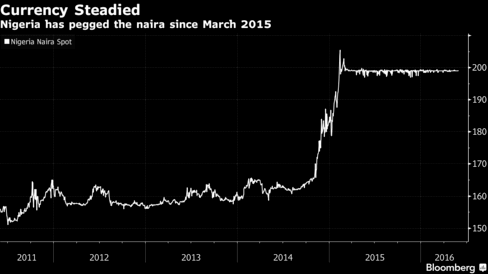 “Based on the president’s recent comments, it is clear he remains firmly opposed to the idea of a devaluation,” Cobus de Hart, an analyst at Paarl, South Africa-based NKC Independent Economists, said in an e-mailed response to questions Monday. “Whether this implies that he may overturn the Central Bank of Nigeria’s decision to allow more flexibility in the interbank market remains to be seen, but what has become more clear is that, even if the CBN goes ahead and introduces some sort of new foreign-exchange arrangement for the interbank market, it will likely not be a fully flexible regime.”

Nigeria’s economy — Africa’s largest — is headed for a recession, Emefiele said last week as the central bank left its policy rate on hold. Gross domestic product fell by about 0.4 percent in the three months through March from a year earlier — the first quarterly contraction since 2004 — as oil output slumped amid militant attacks on pipelines and as the central bank’s foreign-exchange restrictions led to shortages of imported goods, including fuel.

“We cannot get away from the fact that a strong currency is predicated on a strong economy,” Buhari said. “The measures we must take may lead to hardships.”

A health blogger has highlighted how significantly lowering her intake of alcohol improved her health consequences.After reducing her alcohol consumption from 3 times per...
Read more
Uncategorized

Oreo introduces a brand new way to disable app icons from being automatically introduced to the house screen.Android offers you lots of alternatives to...
Read more